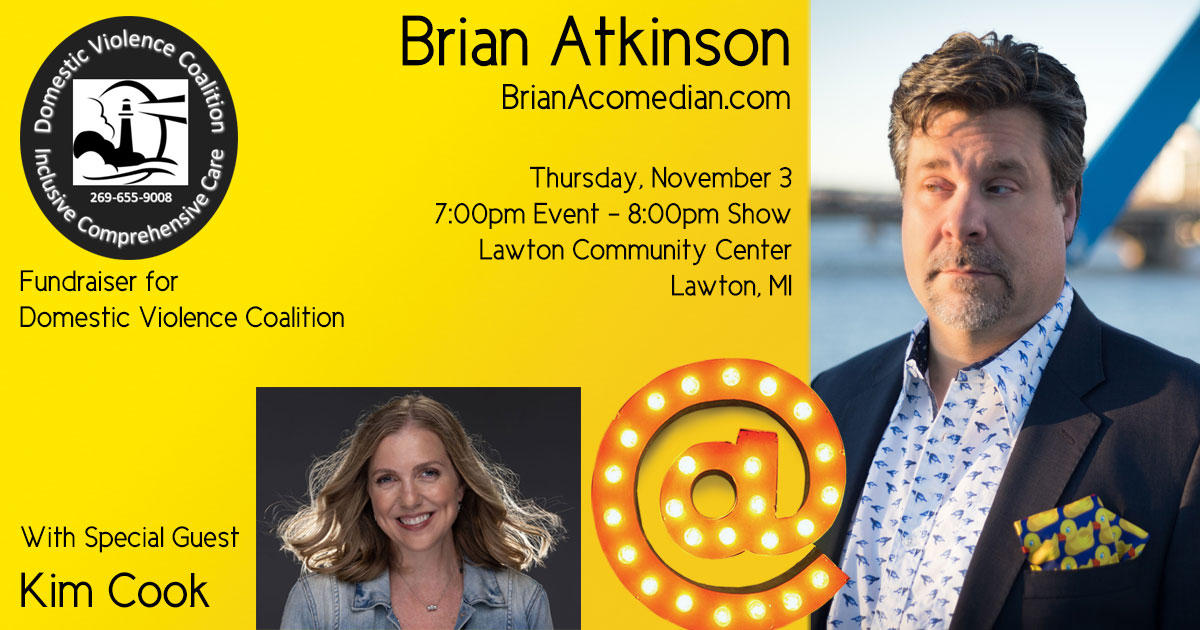 Brian Atkinson is a comedian and all-around nice guy, and a horrible person. His good-guy persona gives way to surprising twists to keep you laughing. While his voice might be the first thing you notice, his confidence, and engaging storytelling will keep you coming back. Brian has provided voices for PBS Kids while also appearing in a Lifetime Movie Network movie, as a serial killer, in the same studio, on the same day. Brian Atkinson makes jokes, but only the finest artisan, hand-crafted, farm-to-table-saw jokes.
https://www.brianacomedian.com

Kim Cook is a quick witted southerner who now resides in Grand Rapids, Michigan. She also has the last name of something she does not do well. Kim loves discussing her British husband, being a dog mom and topical events. She is a Second City alum and has performed at Zanies, Coral Gables Comedy Club, Gilda’s LaughFest, Plano Comedy Festival, The Annoyance Theatre, The Comedy Arena and Hyena’s Comedy Club to name a few.
https://www.facebook.com/kim.bachandcook

The mission of the Domestic Violence Coalition is to provide compassionate assistance to victims of sexual and domestic violence and to work toward eliminating these crimes in our community.
In 1996, two women started The Domestic Violence Coalition (DVC) in hopes of helping those who were abused by their partners. This was only the beginning. Since 1996, DVC has been providing free services to the residents of Van Buren County, Michigan who have been affected by the crime of domestic violence. In 2004, DVC added sexual assault services to our list of no-cost resources.
http://www.domesticviolencecoalition.org/

646 N Nursery St, Lawton, MI 49065
The Houppert Winery Complex, now the Lawton Heritage Community Center, is a complex of buildings constructed as a winery and located at 646 North Nursery in Lawton, Michigan. It was designated a Michigan State Historic Site in 1997 and listed on the National Register of Historic Places in 2000.
https://lawtonheritagecommunitycenter.com