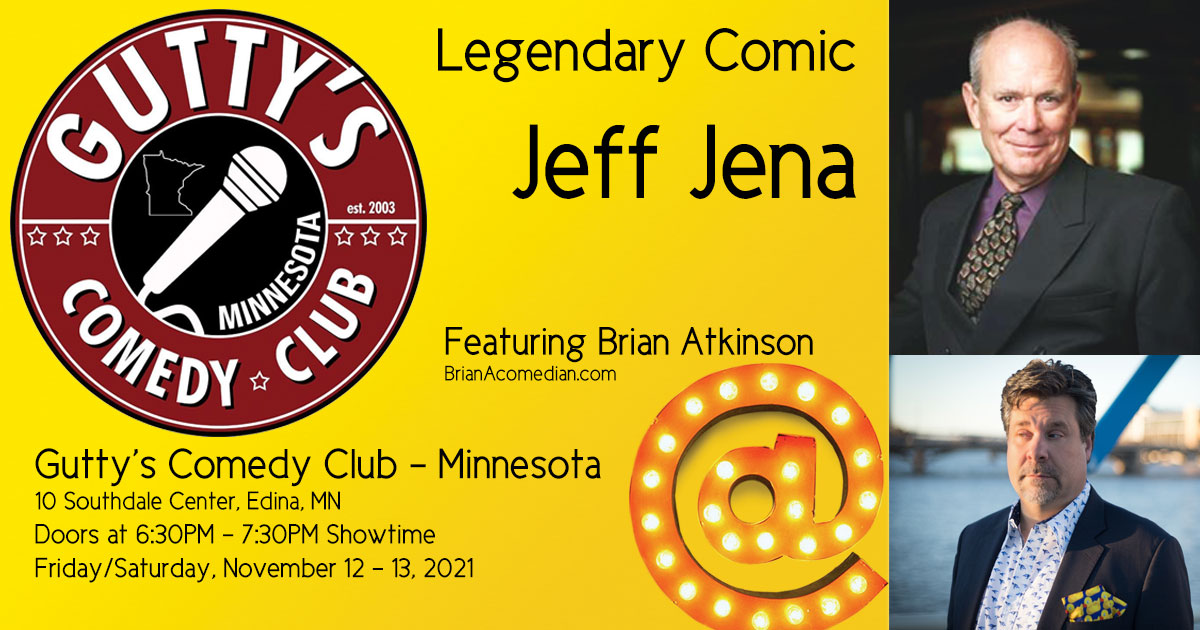 Brian Atkinson is Featuring at Gutty’s Minnesota for the legendary Jeff Jena.
Friday and Saturday, November 12-13.
Doors open at 6:30, 7:30 Showtime.

Comedian Jeffrey Jena is on a roll! At a time when a lot of guys his age are winding down their careers Jeff’s is finding its second wind. At a time when a lot of guys in their early sixties are going their kid’s college graduations he is coaching his son’s 8th grade golf team. In the 1980’s and 1990’s Jeff was one of the premiere comics on Television and the comedy club circuit. Over the last ten years he has established himself as one of the top corporate and cruise entertainers in the country. “My audience,” Jeff says, “has moved from smokey clubs to sleek cruise ships and private events, I just followed them.” They have responded! At recent events he has received high praise and standing ovations for his blend of one liners, storytelling and touching personal tales. His act is focused on family and coming to fatherhood later in life. Both Jeff and his wife were well into their 40’s when their son Miles arrived.

Brian Atkinson is a comedian, all-around nice guy, and a horrible person. His good guy persona often gives way to surprising twists that will keep you laughing. While his voice might be the first thing you notice, his confidence, and engaging storytelling will keep you coming back. Brian Atkinson makes jokes, but only the finest, hand-crafted, farm-to-table-saw jokes.

We bring premiere, clean stand up comedy to everyone! We invite everyone to come and enjoy clean comedy at it’s finest at Gutty’s Comedy Club. We are a Dry Bar ( Non-Alcohol ) Comedy Club open for all ages. This gives us the opportunity to connect with everyone, giving all ages a chance to enjoy live comedy together. We sell pizza by the slice, snacks, and merchandise at the club. All tickets can be purchased using our mobile app. If you can’t make it to a show in-person, we also livestream our comedy shows every Friday and Saturday night, so you can enjoy family-friendly clean comedy straight to your living room.